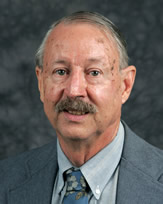 Charles E. Carraher, father of 8 and grandfather of 26, is a Professor at Florida Atlantic University. Professor Carraher received a B.S. from Sterling College, followed by a Ph.D. from the University of Missouri, Kansas City. Well known for his work in renewable resources, metal and organometallic-containing materials, biologically active materials, a broad range of polymer modifications, and even research targeting bioterrorism, Professor Carraher is a prolific author of both peer-review journal papers (over 1,100) and books (over 75), the holder of the first patent for the chemical synthesis of nucleic acids (US Pat. 3,491,061) and is a highly visible presenter (along with many students he brings with him) at ACS meetings.

For the past four decades, Professor Carraher has played an important role in the governance of the ACS PMSE Division, contributing his thoughts and expertise to a wide range of PMSE programs and broadly to the advancement of polymer science & engineering. He is perhaps best known within ACS circles, for his tireless work in PolyEd, the national clearinghouse for polymer education, where he has provided important assistance to educators ranging from K-12 through graduate school programs, and he has fought consistently for the inclusion of polymers in the curriculum required for ACS certified chemistry programs, finally a requirement.

Along with his counterpart in the ACS Poly Division, who will also be recognized for his contributions to PolyEd, the entire ACS PMSE Division is extraordinarily pleased to award Charles Carraher with its 2017 Distinguished Service Award, for many contributions to the division, but especially for his tireless efforts to promote PolyEd, and to modernize the ACS certification requirements.